In Nachi-katsu-ura Town area, a high tsunami caused by the Showa-Tonankai Earthquake in 1944 hit the Nachi Bay and the railway of JR Kisei Line was washed away , along with the Kii-Katsu-ura Station which collapsed. The tsunami caused by the Showa Nankai Earthquake in 1946 reached up to 6 m high in Fukuro, Kushimoto Town. It caused an enormous damage widely around the coastal area between Shirahama Town and Kushimoto Town.

To leave wisdom for confronting such tsunami damage to future generations, a memorial monument and a range pole showing the tsunami height has been built. In Nichi-jinja Shrine of Shirahama Town, there is a warning board that shows the damages tsunami can make and an escape route is shown. Memorial ranging poles showing the highest level of tsunami that hit the area are built in more than 30 localities of the coastal area between Shirahana Town and Kushimoto Town. Among them, the maximum height of tsunami in the past (7.9m above sea level) painted on a mountain slope which you can see from the no.42 national road, in Fukuro of Kii-katsu-ura Town, besides the range poles of tsunami heights. In Nachi-katsu-ura Town along the eastern coast, there is a memorial monument of the disastrous tsunami in the Tenma area, and there is a place name called “the neck of a fish” in the Ichinono area which is also suggested to be related with the maximum height of tsunami that occurred in the past. 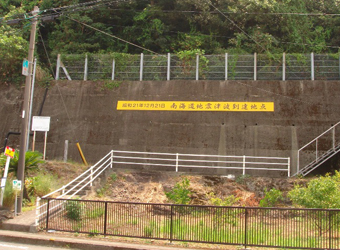 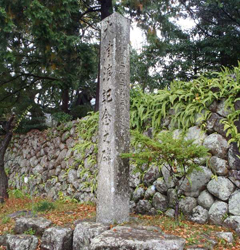 The Tsunami Monument in Tenma

The stories of the people who experienced the Showa Tonankai Earthquake and the Showa Nankai Earthquake are passed down in the area. They play an important role for building up conscious improvement towards the earthquakes and tsunamis that may hit the area in the future. Especially after the Great East Japan Earthquake in 2011, further consideration and practice performance of the escape route based on the tsunami hazard map had been taken more seriously than the past in whole coastal area. Evacuation sites are being improved and voluntary disaster prevention organizations (groups) increased its number.
The prevention of tsunami disaster is underway with self-help (assistance), mutual-help and public-help as one.

Not just passing on stories of the past disasters, studies to utilize prediction and to know the recurrence period of the next huge tsunami has been making progress. The Hashigui-iwa Rock in Kushimoto Town is being researched of the location, movement and the date it occurred from the scattered gravels that had fallen down and it is highly expected to reduce future damages from large earthquakes/tsunamis. 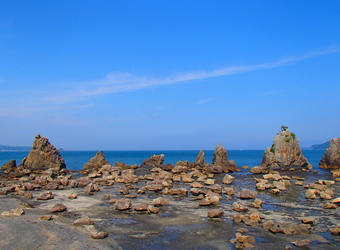 Also, the Nanki Kumano area has repeatedly experienced landslide and flood disasters owing to torrential heavy rainfalls which, on one hand, has brung much contributions to developing forestry in the area, while on the other hand has caused the Kii Peninsula Flood Disaster in the Heisei period and the Totsugawa Flood Disaster in the Meiji peirod.

However, the locals have been making progress in confronting these flood damages. For instance, there is a story of a legendary man named Hikogoro who had willingly became a human sacrifice in embanking a violent river to protect the village of Kanmitonda Town.
You can also see ruins of a River Course Change where the flow of the river had been changed to protect the surrounding town and farmland from flood damage. You can also see specially designed bridges, two along the Tonda-gawa River and one along the Koza-gawa River, that can be submerged underwater so as not to be destroyed at the time of flood, thus you can see that the locals had been dealing with flood as well as can be. 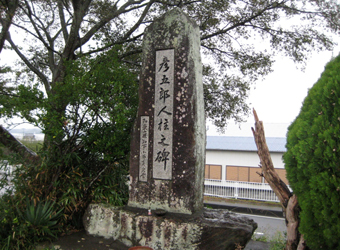 The Monument of Hikogorou’s Human Sacrifice