How the land of Nanki Kumano was Born

How the land of Nanki Kumano was Born 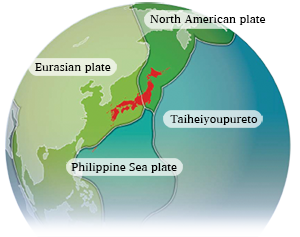 The outside of the globe is covered up by several plates just like a huge jigsaw puzzle.
At present, Japan is right in the middle where 2 oceanic plates (the Pacific plate and the Philippine Sea plate) meet 2 continental plates (the Eurasian plate and the North American plate). 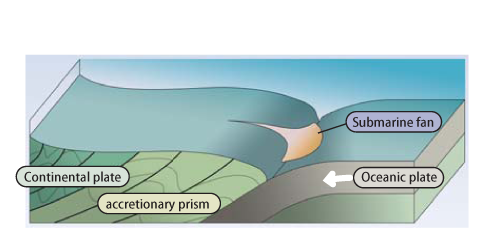 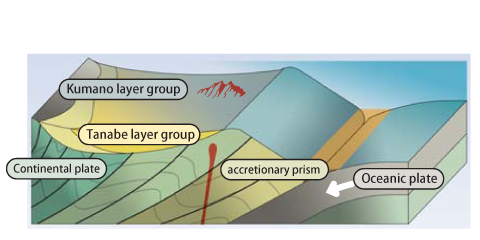 Sand and mud flowed from the land piled up on the fold which was formed on the accretionary prism where it was forced onto the land and became shallow (forearc basin sediments). 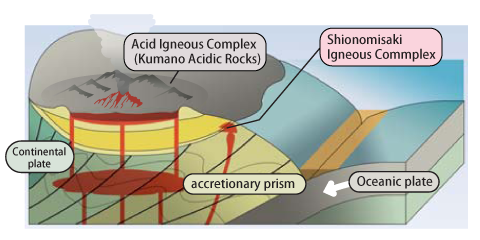 The magma activity became active, and a large-scale volcano (igneous rocks) penetrated the accretionary prism and made a forearc basin sediment. 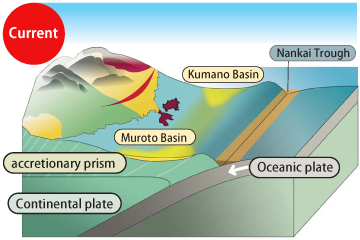 In the Nanki Kumano region there are 3 geological bodies, that are an accretionary prism made of deep-sea trench sediments, shallow forearc basin sediments deposited on accretionary prism, and igneous rocks composed of magma. The present topography is resulted from the crustal movement and weathering erosion in the recent era. 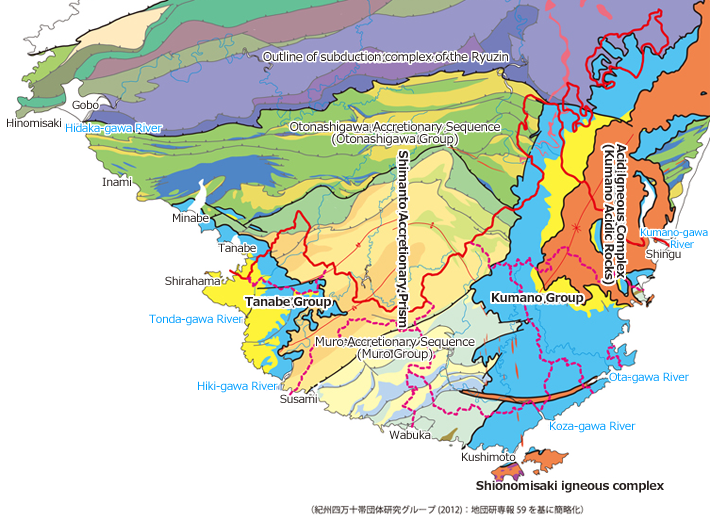 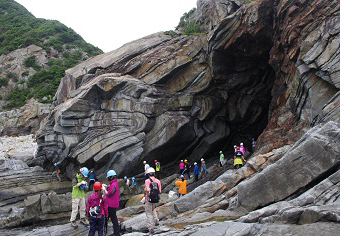 The Forearc Basin Sediments were also supplied by land erosion and weathering. The sediments deposited in the coastal plain and river-mouth were carried to a shallow basin (depression) formed on an accretionary prism. Later, they were pushed up to land surface by the elevation of the accretionary prism. 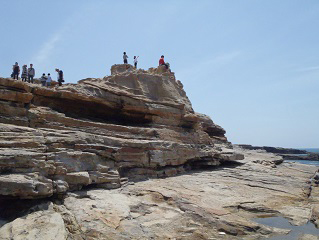 The plate subduction movement had generated hot magma by dissolving a part of the upper mantle and a deep part of the accretionary prism. The magma cooled down and solidified into a hard igneous rock body which became a natural landscape (15-14 million years ago). 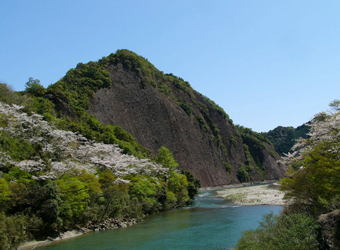 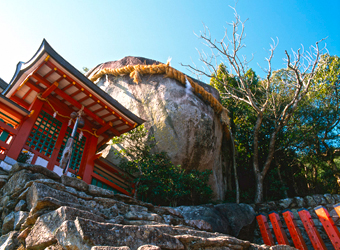 These 3 types of geological bodies are currently all exposed at land surface owing to general uplifting and erosion of Kii Peninsula.

The Kii Peninsula is an area that sticks out towards the Kuroshio Currant where three different kinds of geologic bodies came to surface by plate subduction. Because of this, the steep mountains and the vast ocean are positioned side by side. The vapor from the ocean collide with the steep mountain which cause frequent rain showers that makes the weather mild and humid. The heavy rainfalls and deep rivers make the valley even deeper, but there are some banks and small plains formed near the river mouth.

The Kii Peninsula is elevated as a whole, but you can see submerged topographies in some places. There is a coastal terrace called “Hirami” which was formed when the land was uplifted by the giant earthquake and by the glacial ocean currant in the coast in this area along with a wide wave-cut platform. You can also observe all kinds of complicated seashore landscapes such as the “Drowning Valley” and archipelago.

Right now, the Kumano-nada off the Kii Peninsula is being researched by the IODP (International Ocean Discovery Program) with a deep-sea drilling research vessel “Chikyu (‘earth’ in Japanese)”. Thanks to this, the structure of the current accretionary prism and the plate movement is being clarified. It is expected to unravel the forming mechanism of the prism along with the Shimanto prism in the Kii Peninsula in detail so it might explicate the mechanism of the disastrous earthquakes caused by the plate subduction. In addition, you can see the mud diapir structure in the huge Forearc Basin Sediment which is currently in the spotlight relative to the methane gas-hydrate from the land in Nanki Kumano, and is anticipated as a valuable information source for natural resource searching.